Try a New Point of View: One Topic, Three Takes

A band I once knew wrote a concept album telling the story of the destruction of a kingdom… from the point of view of a rock  on the abandoned castle floor.

Was it a good album? Not at all. Did it make people think? It did, and not just, “How much beer do you have to drink to think it’s a good idea to write an album from the point of view of a rock?” It made people think about how point of view shapes storytelling — the details you decide to include (and exclude), and the tone you choose to use. Point of view is also the difference between a post that falls flat, and one that sucks readers in. 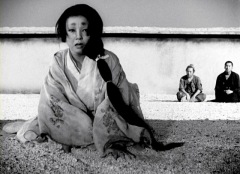 Why is she crying? Depends who you ask. (Machiko Kyo in Rashomon.)

Raise your hand if you’ve seen Rashōmon — the classic film in which characters take turns recounting their versions of the same event. (If you haven’t and you have 88 minutes to spare, it’s highly recommended.) It’s an excellent film for many reasons, not least of which is the fascinating, sometimes unexpected ways the characters’ experiences, values, and desires shape their memories.

Now, here are excerpts from three posts describing the same life experience. None of them includes the subject in their titles, or even mentions it explicitly in these excerpts — but we bet you’ll know what it is after reading, and you’ll have a strong sense of the writer’s perspective.

From “Grief Without a Timetable,” Finding My Ground

Our human condition and resulting emotions are messy and chaotic, but our human brains prefer organization. We like logical progression, moving from A to B to C over days or weeks or years. We like to categorize people and feelings and ways of being in the world. Consider Erikson’s stages of development, the DSM’s divisions of mental illness, the Enneagram and Myers Briggs personality categories, and even astrology’s assignments of traits and fates. We sort and order our belongings and ourselves, desperate for the comfort of order. So ordering grief? Why not?

Because it doesn’t work.

My wife is dead.

She puts on a pretty good show. Moving around. Speaking. Even faking smiles once in a while.

But she can’t fool me. Because I knew her better than anyone.

The woman I see now? The one posing as my son’s mother? The one f**king the rich guy? The one pilfering things from my house? The one avoiding most of our mutual friends?

That’s not my wife.

When her dad died, she died.

From “The Things in My House,” Insane for the Light

The world went gray for awhile after that Sunday, but I was never again unaware of the role of the past in shaping the future. For many years after that I became fixated on history, as if trying to remove myself from the present and ensconce myself elsewhere, perhaps back before all these troubles had started.  I sensed something radically messy about my fragmented family, and I buried myself in novels about girls and women who lived a hundred years ago, when roads were not paved and dinner was not microwaved, and fathers did not leave families and mothers did not have to go to work downtown – or so I thought, with a child’s sense of simplicity.

Three posts about divorce, three perspectives, three tones, three reading experiences. (We encourage you to go read the full posts, both to see how they end and because they’re incredibly good.) A woman struggling to create order from a chaotic experience. A husband frustrated with his wife’s destructive behavior. An adult reflecting on and processing a childhood trauma.

Scrolling through the Reader can be a Rashōmon-esque experience; there are so many worthy posts on the same topics, whether politics or parenting, but with vastly different angles. Just as a photographer can help us see a familiar landscape in a new light with the perspective she chooses to present, so do writers. A writer’s perspective helps them decide what aspects of a story to highlight or downplay. It also informs their tone. Detached and academic. Angry and clipped. Lyrical and effusive.

Most importantly, a writer’s viewpoint helps us consider our own. Point of view is the difference between a post that simply lists who/what/when/where, and a post that delights, excites, angers, or horrifies us because it makes us think — in other words, a post that engages us as readers and as people. “Is that why my mother was thinking when she said that?… I never realized the impact of that decision on my co-workers… I hadn’t considered that policy from the point of view of international students… Is that what I sound like?”

What’s the point (of view)?

Why did we ask you to read those posts? First, because they’re great reads; second, because the proof is in the pudding — they illustrate the way point of view influences storytelling and creates a distinct reader experience better than a description ever could.

What does this mean for you as a blogger? A few things:

We all want interaction on our blogs — not just pageviews, but conversation and connection. Point of view is one of the factors that encourages those conversations, by giving readers a stronger sense of who you are and an entry point to your thoughts and experiences.

If we simply wanted to learn about divorce, we’d read Wikipedia. We go to blogs because they’re written by individual people with unique perspectives; they give us access to others’ experiences in a way no other medium offers.  Understanding this and thinking about the point of view of your posts (and your blog as a whole) is a critical piece of building a blog that readers visit again and again.