A beautiful photo is one thing, but a photo with an unexpected detail has personality and pop. This week, share a photo that has a little something extra.

"Third Wheel at the Blue Mosque," by Michelle Weber.

On vacation in Istanbul last week, I frequently found myself sitting in the courtyard of the Blue Mosque, drawn by the juxtaposition of the structure’s tranquil bulk with its constant flow of worshippers and tourists. In a quiet moment after Friday’s afternoon prayer, I caught two friends — or is it three? — taking a moment to catch up: 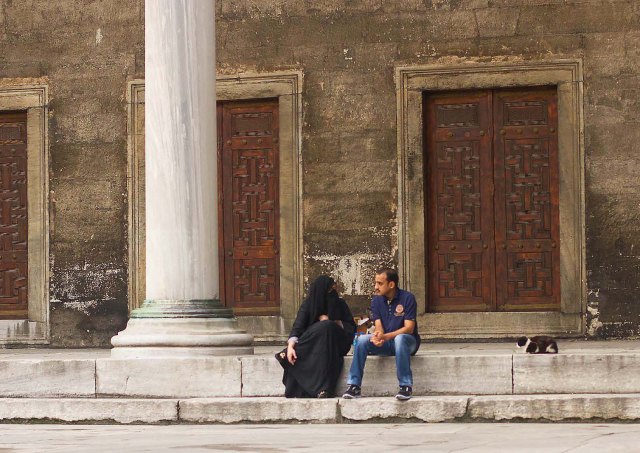 Istanbul has many stray cats freely roaming the old city. This black-and-white fellow was also frequent a visitor to the Blue Mosque and was keenly interested in what these two had to say (or perhaps the snacks they had in their pockets). Over the course of ten minutes he crept ever-closer, an adorable eavesdropper. I would have taken this photo had he not been there, but the presence of an interesting extra made this shot all the more irresistible.

This week, share a photo that has a little something extra: an unexpected visitor, or a tranquil landscape with a splash of color. A lone carrot in a sea of peas. Draw us in with a humorous detail, or find a photo with an added element that makes it an image only you could capture.

If you’d like, go broader and show us a thing or place you think is an extra — a thing you could do without, or a place that’s not part of your day-to-day life but has meaning for you.

468 Responses While this challenge is closed to new entries, we encourage you to visit the Reader to find other avid bloggers.

Create your blog at WordPress.com
Room
Between