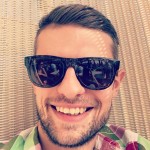 The designers behind these companies understood that you don’t get a second chance at a first impressions, which makes designing a logo one of the most critical steps when branding your business or website.

With this in mind, here are some logo design tips from some of history’s most prolific logo designers, and how to apply them to your projects.

It was the mid-1970s, and New York City needed an image change. The crime rate was at an all-time high and the city’s reputation was in tatters.

An advertising agency called Wells Rich Greene was hired to do something about it, and Milton Glaser was tasked with designing a logo that would boost the city’s morale.

The result? Perhaps the most iconic logo of all time: I Heart New York.

This logo has since become a pop culture icon and is reproduced on everything from t-shirts, to mugs and hats.

One of the many great things about this logo is its context: it was created to boost morale and improve the city’s image, and it did just that.

Glaser took a minimalist approach, choosing not to use any of New York’s popular themes (like the Statue of Liberty or other landmarks). Instead, he opted to for an emotional play on words and drew people’s attention elsewhere.

As for logo design tips that we can extract from this example: remember that the idea behind a logo, and the reason it’s created matters. The visual elements of the logo should compliment its deeper meaning. Or, in Glaser’s own words:

“The next time you see a sixteen-color, blind-embossed, gold-stamped, die-cut, elaborately folded and bound job, printed on handmade paper, see if it isn’t a mediocre idea trying to pass for something else.”

2. Be memorable by being simple

Like text, complicated logos are more difficult to recall. Quality logos can exist even without the companys’ names integrated into them. Take Shell’s logo, for example:

This logo has remained the same since 1971, when it was designed by Raymond Loewy.

It’s simple, and uses a visual representation of the company instead of incorporating the Shell name into it.

“It would seem that more than function itself, simplicity is the deciding factor in the aesthetic equation.”
-Raymond Loewy

Something you might already know about it is that it includes a subliminal message: there’s an arrow sitting in the negative space between letters “E” and “X.”

Including this sort of messaging into your logo can be a great way to help potential customers associate particular qualities with your business. In FedEx’s case, those qualities are speed and precision.

However, including a message like FedEx did isn’t easy. Here’s what Lindon Leader, the creator of the logo, admitted in his interview with The Sneeze:

“…by the time we’d gotten to this point we’d already created and reviewed over 200 designs.”

Your turn to get creative

If you want to design a great logo, you can’t wing it and expect to strike gold on your first try. Even the most iconic logos go through a number of iterations. The final logo design tip is not to get discouraged if your first design doesn’t turn out how you expected. Just keep the previous three tips in mind and you’ll get there eventually.