“There is hope in dreams, imagination, and in the courage of those who wish to make those dreams a reality.” – Jonas Salk

Shinto is the dominant religion in Japan, though it is more of a way of life than a way to worship. Faith is very personal and very fluid there; people freely celebrate the holidays and traditions of other religions. Nearly four million people in Japan celebrate Christmas with Kentucky Fried Chicken as their holiday meal every year!

Visitors to Shinto shrines can purchase small wooden plaques called ema, upon which they can share their hopes and dreams. Then, they hang them amongst other ema from people who have come before them, in the hopes that spirits will grant their wish. I first encountered ema during a trip to Japan several years ago, displayed at Meiji Shrine in Tokyo. The ema were covered in myriad languages and sentiments; they were fascinating.

Ten years later, I still wonder what their reunion was like. Photo by Jen Hooks 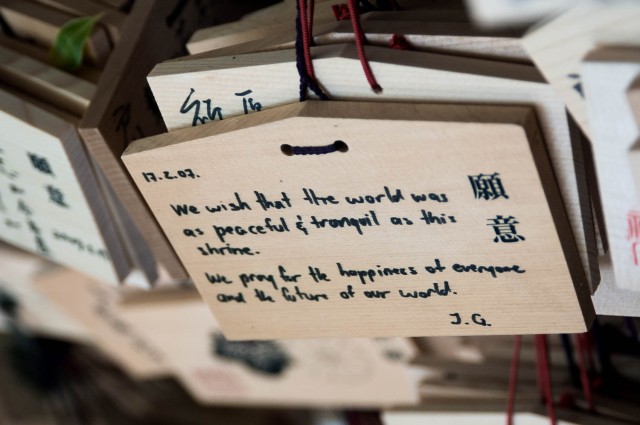 Wish upon an ema. Photo by Jen Hooks

One of the most beautiful sentiments I’ve ever read. Photo by Jen Hooks 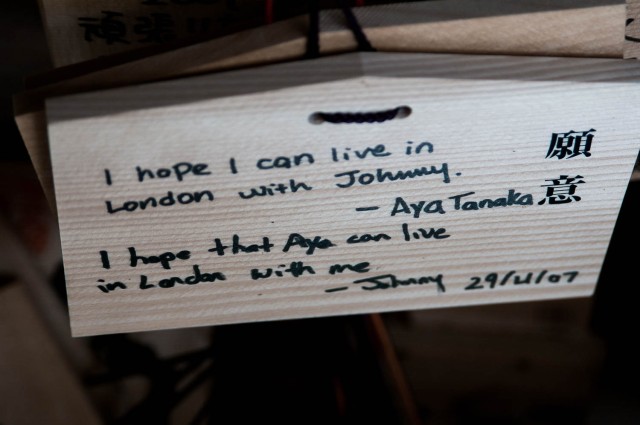 I hope Aya and Johnny lived happily ever after in London. Photo by Jen Hooks

This week, show us a wish, and let your blog be the ema upon which you share it. As always, I can’t wait to see everyone’s contributions.

481 Responses While this challenge is closed to new entries, we encourage you to visit the Reader to find other avid bloggers.

Create your blog at WordPress.com
The Road Taken
Atop