Whether your own or someone else’s, literal or figurative, take us on a photographic adventure.

"Out to Sea." Photo by Michelle W.

Typically, the only time I’m awake when the sun rises is when I’ve failed to go to sleep the night before. Once in a great while, though, I’ll drag my groaning carcass out of bed in the pre-dawn light in search of a good shot.

On one of those rare early mornings, I snapped this photo of paddleboarders heading out to sea for a day’s adventure: 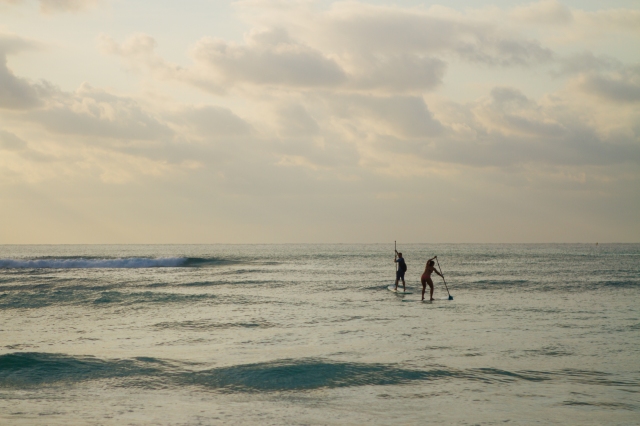 “Out to Sea.” Photo by Michelle W.

The sun had risen ten or fifteen minutes ago. The morning sky was a pale non-color hovering between blue and grey, as though it were also undecided about whether it wanted to be up that early.

I found myself drawn to the flat, almost monochrome melding of sea and sky, and how it created a massive canvas for the two small figures paddling resolutely forward. They looked as though they were headed into the great wide open, on the start of a grand adventure (which, since they were headed out to sea, I suppose they were). I like to imagine they befriended a narwhal and learned a valuable life lesson from a school of dolphins.

I took a photo and quietly wished them well. And then I walked home and went back to bed for a few more hours, pleased with the morning’s work.

This week, share a photo that says “adventure.” It could be an image of someone setting off on an epic journey, a photo you took on an adventure of your own, or something more metaphoric that represents a personal or psychological adventure. We’re excited to see where you’ll take us!

571 Responses While this challenge is closed to new entries, we encourage you to visit the Reader to find other avid bloggers.