Quick takes on photographing strangers, from seven WordPress photographers around the globe.

Stephen McLeod Blythe, All My Friends Are JPEGs
Glasgow, Scotland

Last year, we published posts that touched on street photography: Russ Taylor shared his creative process on photographing people all over the world, and Dominic Stafford talked about documenting the streets of Southeast Asia.

But what is street photography? Over on Photo Theory, John Meehan writes:

What is striking about attempts to define “street photography” is the striking lack of consensus.

— On the Nature of Street Photography

We asked a handful of WordPress photographers for their quick takes on photographing strangers and publishing street photography images on their blogs. This post isn’t intended to tell you what’s “right” or “wrong,” but rather to provide you with examples of other photographers’ personal guidelines — so you can formulate your own processes when shooting and posting.

What are a few of your own guidelines for street photography and photographing strangers?

Advice from Jon Sanwell: “Smile. Be confident, but not overbearing. I try to establish some sort of connection with the people I photograph, even if only for a few moments. Remember you’re dealing with people, not just subjects for your photographs.

Take refusals in good heart and move on, and don’t get dispirited.

Jon: There are many different approaches to photographing people on the street, mainly defined by how photographer and subject interact, if at all; this level of interaction can be imagined on a sliding scale, which I think of as a kind of spectrum of awareness. At one end of the spectrum, you have pictures of people who have no idea they are being photographed. Purist street photographers would argue that this is the only way to go. At the other end, you have people who are super-aware of the photographer. They’re pulling their Photo Face, giving a thumbs up.

In between these two extremes, though, there’s a lot of space. It’s possible to take a street portrait of someone who’s aware of your presence, but is comfortable with it, and is acting naturally. I think this is what Steve McCurry means when he talks about “the unguarded moment.” This is what I’m aiming for when I take a street portrait. Some say that engaging with people on the street can ruin the moment, but I would argue that it can create a moment.

Hanoi street portrait by Jon Sanwell, Without An H

I prefer when the photo is flattering to the person but sometimes that isn’t the case. The moment is fleeting, unplanned, dynamic, and gone in an instant.

Shane: There is a lot of discussion around the ethics of street photography, and in a growing number of cities around the world, it’s becoming more difficult to avoid unwanted attention from the law. When I’m out shooting, I aim for nothing more than to capture an interesting scene or a moment in time, and when people are unknowingly caught in the frame, I think it adds to the genuine feel of the moment.

With that in mind, I have a few personal rules:

1. When starting out, photograph people who convey a sense of showmanship or confidence, either through a fantastic hair style or a wardrobe that makes them stand out. If they’ve noticed you take their picture, more often than not they’ll see your interest in them as a compliment. When someone notices you’ve taken their picture, give a friendly smile and calmly be on your way.

2. Photograph at close range, but make sure not to startle or prevent people from getting to where they need to go.

3. Approach a group of people who are photographing each other. You share a common interest in photography, so they may be more open to being photographed by a stranger.

4. Always shoot with a purpose: decide what you want to shoot before you hit the streets. I’ve had more success when I’ve decided to shoot things that are red, or people with dogs, or action on a street corner, or men in suits smoking pipes.

5. Don’t worry about what other people might think because they’re likely lost in thought and won’t notice you taking their picture.

Curiosity. It will get you far in life and in photography. . . . You have to carry that same childlike curiosity with you if you want to capture the energy and essence of the places and people you are photographing.

Stephanie: When you see someone you’d like to photograph, connect with them. Smile. Ask questions. Make them laugh. Don’t just take the picture and walk away. Show them the photographs you’ve taken. Ask what makes them tick, what makes them feel alive, what their favorite part of the day was, or what they are most grateful for. Sometimes you’ll get a sad story, or sometimes a happy one. Be empathetic. If you don’t speak the same language, pay attention to mannerisms and gestures.

Joshi: I try to keep a low profile. When approaching subjects, I try to be nice and keep in mind that for them, even the world’s most popular photographer will mean nothing. I take the time to observe people so that when I’m ready to shoot, I don’t waste their time. A couple of shots, and I’m done.

There may be times when your subject says that they don’t want to be photographed, and it’s important that a photographer respects this. If someone seems to be in distress or needs help, it’s always better to help rather than try to capture it.

There are times when I may not be able to shoot someone, but the interaction with a stranger might make me happy.

Leanne: When I’m out in the city taking photos, I try to respect a person’s right not to be photographed. I don’t like being photographed myself, so if I can tell that a person doesn’t like it, I won’t take it. I don’t tend to ask permission, unless I specifically want to photograph someone, and they’ll notice. But I prefer more candid shots — ones where people are just doing what they do.

I like to walk around and watch people, and if there’s some nice interaction going on, I usually pretend I’m going to photograph something else, and then quickly take a shot before they realize I’ve gotten it.

Stephen: I never want people to feel uncomfortable, or like I’m intruding on their personal space, even if they are out in public. If people do spot me taking their picture, I don’t try and hide it, but smile so they don’t feel threatened, or like I’m up to something dodgy. Most of the time that’s all it takes to make somebody feel good, and turn a potentially negative situation into a positive one. If somebody asks me why, I explain what drew me to take their picture in the first place: “your hair looks amazing,” “that tie is fantastic” — something genuine.

Whilst I know that some incredibly powerful images involve the juxtaposition of poverty and wealth on the street, when I’m shooting I generally don’t feel comfortable taking pictures of homeless or otherwise disadvantaged people. I don’t judge people that do, but think that it’s something that needs to be treated with extra care. Otherwise it can come too close to exploitation.

What are some of your guidelines for the street images that you publish on your blog?

I have one simple guideline for posting street images on my blog, and that is to make sure I’m proud of sharing those images.

Shane: When I approach a stranger for a street portrait, I explain why I’d like to take their photograph, and get their email and share both the post and a selection of images that they are free to use for their own purposes. I value the time someone has given to me on the street, so I feel that it’s only fair to thank them with a photo that makes them look their best.

Stephen: I take pictures of people because I find them incredibly fascinating, complex, and amazing. I wouldn’t post something that deliberately makes someone look bad, like if they’re caught in the middle of a sneeze or other unflattering pose. That does a disservice to you as well as them. Oh, and if somebody asks me not to publish a photo, then I generally won’t.

Leanne: Children can be the best to watch, but the morals of photographing them have changed. I photograph them quickly, but will only use images on my blog if you can’t identify them. So, no face-on shots.

I won’t publish a photo on my blog if it isn’t flattering — I don’t post anything that may embarrass a person. On a side note, it’s best to learn the laws where you are. In Australia, you can photograph anyone in a public place, but you have to find out what is deemed to be public. A public library may be “public,” but it often has its own rules. The streets are fair game, and, by law, you can photograph anyone, even children. But you have to use good judgment.

Read more about a photographer’s rights in Ireland on Donncha’s blog.

Donncha: In Ireland, everyone has a right to their own data. That includes their image, but there are exceptions for journalism and art. That means if someone asks you to delete an image of them, you should probably comply. 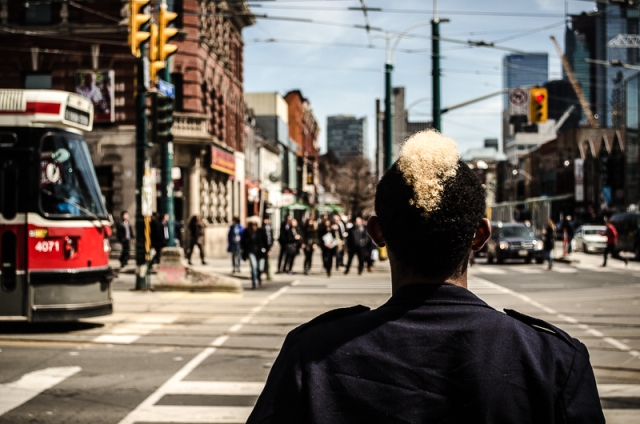 If you’re new to this discussion and the larger questions and issues about street photography, check out some of Eric Kim’s personal guidelines, this ever-evolving list of resources, or the street photography posts at Contrastly. We’ve also compiled further reading material: