Photography 101: The Rules and Elements of Composition

Jeff Sinon introduces some of the “rules” and elements of composition.

Recently, photographer Wenjie Zhang introduced us to the fundamentals of light. Let’s continue our journey through the Photography 101 series and move on to composition. For the next few installments, photographer (and active Daily Post participant) Jeff Sinon takes the reins. Here in part one, he introduces some of the “rules” and elements of composition, and in part two, he’ll offer insights and tips on how to find the best shot.

Jeff illustrates his points with stunning landscapes and nature scenes he’s captured, taken mainly with his Canon 7D, but you can apply his techniques to your own images, no matter your camera or subject matter. Let’s go!

No matter your skill level in photography, or how “honed” your visual eye may be, we’re all naturally curious about what we see. Images take our eyes on a journey, whether we’re looking through a viewfinder or examining a photograph. These next two posts on composition explore this idea and encourage us to look for the elements within a frame that help us to tell our stories.

The Rule of Thirds

Beginning photographers can’t go wrong with the Rule of Thirds. When looking through your camera, visualize the scene before you with a grid consisting of two vertical and two horizontal lines, similar to a tic-tac-toe pattern, placed over it. Place the main subject of your photo on one of the points where the vertical and horizontal lines intersect.

One invaluable aid on my Canon dSLR is the “live view” feature, which displays this grid over the LCD screen while I’m viewing a shot. I think many cameras have a similar live view option, if not the grid overlay. (Here is where it pays to read your camera manual!)

Tip: Place your subject over each of the intersecting points on the grid until you find the composition that works best for the scene.

For cameraphone users: Most mobile phone cameras have this optional grid. On the iPhone, for example, click on the “Options” button and adjust the “Grid” setting to “On” to display these lines.

An overview of compositional elements

Look for strong visual elements when framing a shot — different subjects or points of interest that grab the viewer’s eye and lead it through the photograph. Let’s take a look at some strong examples of compositional elements:

Leading lines, whether intentional or accidental or man-made or natural, draw your eye through a photograph: 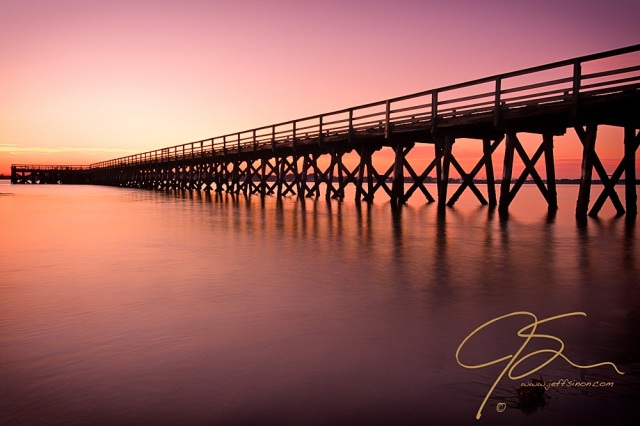 Curves, which may resemble the lines of the letter “S,” can be subtle or pronounced. You can see “S” curves in this image of Rocky Gorge in New Hampshire’s White Mountain National Forest:

Patterns lead the viewer’s eye as well, like the layers in this moody image of the White Mountains: 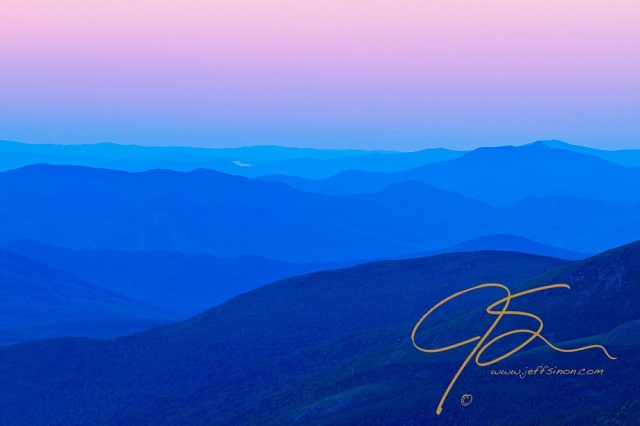 Think about a photograph’s composition as having foreground, middle, and background elements. For example, when looking for foreground elements in the front part of your image, consider an object as simple as a large rock, like this one at Baxter Lake in New Hampshire:

Your foreground element isn’t necessarily the main subject of your photograph, but rather a starting place for the viewer’s eye.

For vast scenic landscapes, think about the placement of the horizon, too. If I’m working with a pronounced horizon in the scene, such as in a seascape or a scenic mountain range, I’ll place the horizon on one of the horizontal lines in the grid pattern, and never — well almost never — dead center in the frame.

Other than the color of the sun burning through the fog, there isn’t much going on in the sky, so I included less of it. Notice the strong foreground element — the seaweed — in the lower third of the image. Your eye is then lead through and over the rocks (in the middle ground of the photo), and toward the rising sun (in the background).

To contrast, the sky is the photograph here:

Everything else takes a back seat to that boiling fire burning in the sky.

Even if you’re not taking these types of landscape photographs, you can apply these tips to other scenes and subject matter.

Learning — and breaking — the rules

Though the horizon is nearly centered, the setting sun is far from it, placed in the right third of the frame. Rules can be broken, yes, but one rule I keep in mind is to never place the sun directly in the center of the frame. Since the human eye is drawn to bright light, the viewer’s eye may go directly to the bright sun — and get stuck there. Ideally, you want the eye to roam around, and for the viewer to become fully immersed in your image.

Tip: Get comfy with these “rules” of composition. Then experiment and break them! When you don’t achieve the look you want, figure out why, and try again. And when you do capture the perfect shot, remember what you did — what rule you broke — so you can do it again.

Get outside and start shooting!

After serving in the US Air Force, I’ve spent the last thirty years earning my living as an auto mechanic. Though I’ve always been creative, it wasn’t until about five years ago that I stumbled into photography. Interested in astronomy, I wanted to try to capture some of what I saw through the eyepiece on my telescope. So, I bought my first DSLR in 2008. It didn’t take long before I combined my love of the outdoors with photography. I’ve decided to pursue it on a more professional level, with the dream that one day I can put down the wrenches for the last time and earn my living as a photographer.

I currently live in the Lakes Region of New Hampshire, with my wife Lisa, daughter Nicole, and a big goofy yellow lab named Hunter. You can follow me on my blog, my website, or my Facebook fan page.

Previous posts in our Photography 101 series