Sean Manning talks about the inspiration and process behind choosing his blog name, Talking Covers.

Last fall, we talked to two writers on WordPress.com about how they picked their blog names. Today, we’ll chat with another WordPresser, Sean Manning, who selected a great name for his blog, Talking Covers — a site on which authors, designers, and artists come together to discuss a particular book cover they’ve worked on. 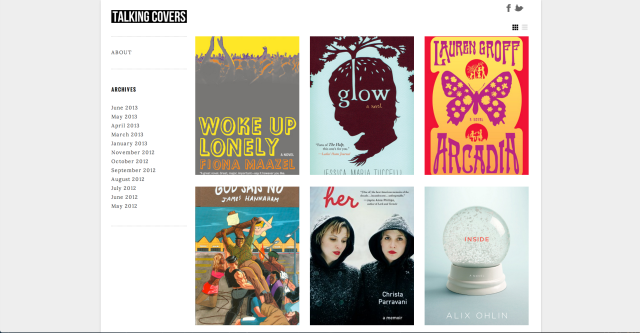 Sean is an author and editor, and has contributed to numerous publications like The Village Voice, The Daily Beast, and USA Today. His site offers a glimpse into the creative collaboration of book cover design, and the input gathered is insightful and eye-opening. We asked him about his process for choosing his blog name.

How did your blog name, Talking Covers, come about?

My first choice, Under Cover, had already been used by The New Yorker’s website for a short-lived series on book cover design. (They only talked to designers, whereas my idea was to get comments from both designers and authors.) My girlfriend and I kicked around a dozen or so other names — all of them played somehow on the word “covers,” and all of them were terrible: Beneath the Covers, Discover Covers, Books Uncovered, A Book By Its Cover, Cover Lovers.

It needed to be simple, verging on bland, even — something that plainly stated what the blog was about without any tone that might influence how you looked at the content. I wanted the blog to be as much of a blank canvas as possible, with little of my voice or presence — just the contributors’ comments and the images standing on their own. Talking Covers seemed to be the best option, since that’s exactly what the blog was: designers and authors talking covers. I also really liked that it could be read the other way, as the book covers themselves talking, which after all is what they’re supposed to do — call out to you and invite you to open them up.

Do you use this name on other sites or for other purposes?

I also use @talkingcovers as my name on Twitter. I wish I could say it’s my attempt at cross-platform branding, but really it’s because — what with Facebook and LinkedIn and email — I didn’t want to have to remember yet another random username.

After blogging for about a year, are you still happy with this name? How has it proved successful (or not)?

I am happy with it. I’m usually pretty terrible with titles. I’ve edited four nonfiction anthologies and the publishers — thankfully — changed my title for every one! But I think Talking Covers holds up. If nothing else, it’s short and easy to say. And it’s versatile.

Earlier this year, I did a live event at the Last Bookstore in Los Angeles where I talked with author Jonathan Lethem about all of his book covers. The event was billed as “Talking Covers with Jonathan Lethem,” which, again, has that nice double meaning.

Got advice for bloggers choosing a custom domain name?

Don’t obsess over it too much. What really matters is the quality of the content. Put a lot of time and effort into that and people will read your blog no matter what it’s called.

Thanks for chatting with us, Sean!

We’ll continue to chat with other bloggers about how they chose their WordPress.com site names — stay tuned.

Community Pool
Posts We Loved: “foodface – my friends and what they ate”